Since joining us in March, Jean’s engaging personality has earned her many new friends.

The Quincy native can often be found on the patio, where she loves to bask in the sun while chatting with her neighbors. A frequent visitor to our new Activities Center, Jean enjoys bingo and exercise – and is especially fond of DrumFIT.

But her favorite brand of exercise, hands down, is dancing. At any musical event, Jean springs to her feet and begins moving to the beat.

Jean has an impish sense of humor and laughs easily. That laughter once faded, however, in 1999, when Llewellyn—her husband of over 40 years—died at age 68. The two had met and married on the Cape, after which his career brought them to Hanover.

Suddenly alone for the first time—Jean returned to the Cape, the place she loves “most in the world”.

Within a couple of years, however, Jean was blessed to be given a joyous second chapter in life, one that few are fortunate enough to experience.

In Kismet fashion, she reconnected with an old flame, Donald, and a warm relationship soon was rekindled. The two became constant companions until his passing, about two years ago.

“She had 18 wonderful years together with Donald,” Jean’s daughter, Valerie, said. Jean also has a son, Keith, and five grandchildren of whom “she’s very proud,” Valerie added.

Jean had once been a seamstress in a bridal shop, a skill that would serve her children well.

“She made all of my clothes when I came along,” Valerie said. “We always had homemade Raggedy Ann dolls and Christmas stockings.”

Jean also was a top-notch gardener, and the grounds of her Cape-style Hanover home were so spectacular they were featured in Better Homes & Gardens [magazine].

Decatur House was fortunate to add Jean, a cheerful new resident and friend, to our growing community.

Decatur House In The News
All News

Get our Monthly Newsletter! 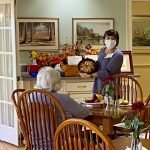 About
Our Story
Our Location
What Makes Us Different
Our Community